Raleigh has seen substantial growth and improvements over the past few decades and there is much more to come. A rising topic of importance, especially for younger generations, is effective and multi-modal transportation. Multi-modal transportation is an approach that emphasizes giving citizens more than a single transportation option. The beauty of it is that even if you’re the sort of person that will always use a car it still benefits you. More people choosing to bike or use public transit means fewer people driving and less congestion, not to mention less environmental impact and wear and tear on roadways. Government officials and private enterprises have been hard at work to provide us with innovative transit now and in the future. I’ve highlighted some exciting and game changing projects. Enjoy!

Currently, Raleigh has an effective bike infrastructure network that has earned it bronze-level designation as a Bicycle Friendly Community. Adopted in 2016, the BikeRaleigh Plan is a blueprint for bringing the city up to silver-level and further. The plan reaches 2026 and aims to achieve silver-level status by next year. According to local bicycle advocacy group Oaks and Spokes, separated bikeways, neighborhood bikeways, bicycle lanes and greenway trails will see a 49% increase, going from 187 miles of infrastructure in 2016 to 278 miles by 2026. The plan aims to increase accessibility and safety to boost bicycle use for recreation, tourism, commuting and more. Below is a map of current and planned expansions of Downtown Raleigh’s bike infrastructure. Plan maps of other parts of the city and the full bike plan are available here. 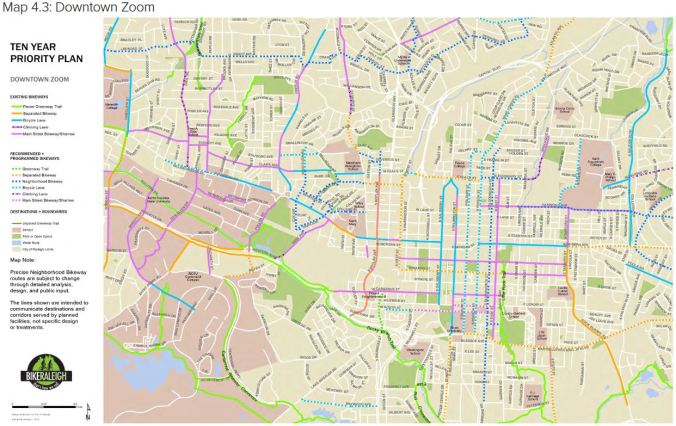 Citrix Cycle will be a public bikeshare program centered in and around Downtown Raleigh. The service is designed for short trips around the area, utilizing 30 stations to start. Half of the 300 bike fleet will feature electric-assist motors, providing an extra boost to riders. Users can access the bikes for 45 minutes at a time and each additional 30 minutes costs $2. However, riders can “check-in” at a station before the 45 minutes is up and restart the 45 minute clock at no additional cost.

Access to cycles will range in cost from $2 per 45 minutes for one time use up to $85 to access cycles for an entire year. Different price and plan options are designed to offer residents as well as visitors reasonable and flexible options.

Cycles are equipped with LED lights, display screens to track distance and time as well as secondary locks for leaving bikes while running into a store for a quick errand.

Unlike dockless bikeshare systems (discussed below), Citrix Cycles must be docked at a station upon completing a trip. Citrix Cycle will be accessible via membership key fobs, station kiosks, the mobile app, integrated GoRaleigh bus cards and cash payment.

As you can see in the map below, the stations are mainly centered around Downtown Raleigh with service down Hillsborough Street and as far out as the North Carolina Museum of Art. According to the official website, the service is scheduled to launch in late summer 2018. Considering we’re rapidly running out of summer 2018, expect to see Citrix Cycle in action any day now. 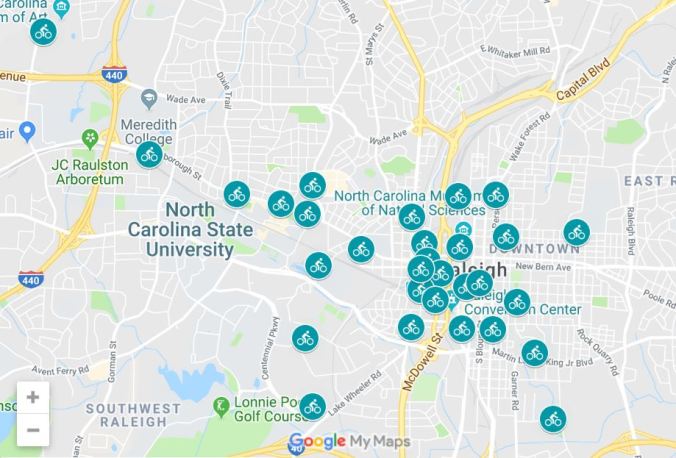 A rapidly growing choice for cities around the world, Bus Rapid Transit functions with many of the same principals as a subway but with lower costs and increased flexibility. Buses have designated stations where passengers pay before the bus arrives and raised station platforms allow passengers to quickly flow in and out of the bus. Buses use special lanes that are off limits to regular traffic and are given increased priority at stop lights. For a visual of the system and a more thorough explanation check out this video.

Wake County’s current $2.3 billion transit plan includes a Bus Rapid Transit system that would operate on Capital Boulevard, New Bern Avenue, Wilmington Street and Western Boulevard into Cary. There is still a lot of planning to be done and nothing is set in stone but it looks like the system will be coming to the area sometime in the next 10 years. Below is a map of the 4 routes which would serve important city hubs and would be linked to other bus routes.

As far as this article goes, Bird is the wildcard here. If you’ve been in Downtown Raleigh during the day recently you’ve probably seen several people buzzing around town on Bird scooters. Bird provides a dockless electric scooter-share service accessed via the company’s mobile app. Basically, users find a nearby available scooter through the mobile app and then pay $1 per use and 15 cents per minute. After they’ve reached their destination they simply park the scooter wherever, lock it with the app and that’s that. Bird employees pick up the scooters every night at 7 pm to recharge them. Scooters can travel up to 15 mph and are meant to be used only in “metropolitan areas.”

While the Birds have stormed downtown there are still a lot of questions over how exactly the city is going to handle the new form of transportation zipping around the capital. The company arrived in Raleigh without notifying the city and has been subjected to fines and temporary bans in other cities while municipal governments work out exactly how to handle the scooters.

They do present potential problems. Bird asks that all scooters be left off private property and pedestrian walkways. However, this has not always been the case, creating pedestrian hazards. The scooters are also not without risk. The company asks that all riders wear helmets, obey traffic laws and avoid downhills but these rules are impossible to enforce given the hands-off nature of the service. I will say, they certainly do look fun and innovative but exercise caution, follow all rules and don’t do anything you don’t feel you are ready for.

Also worth noting is Lime, a dockless bikeshare company that is currently operating in Wake and Durham Counties. Lime operates using a similar system as Bird but using bikes instead of scooters (though they do offer scooters in some other cities). Durham also has Ofo (yellow bikes) and Spin (orange bikes), two other dockless bikeshare services.

Thanks for reading and check back at the beginning of the month!

In respect & appreciation of writer’s talent & time, we ask that this content is not copied in whole or in parts.  For the stuff here that you want others to see, please forward the blog link to share.